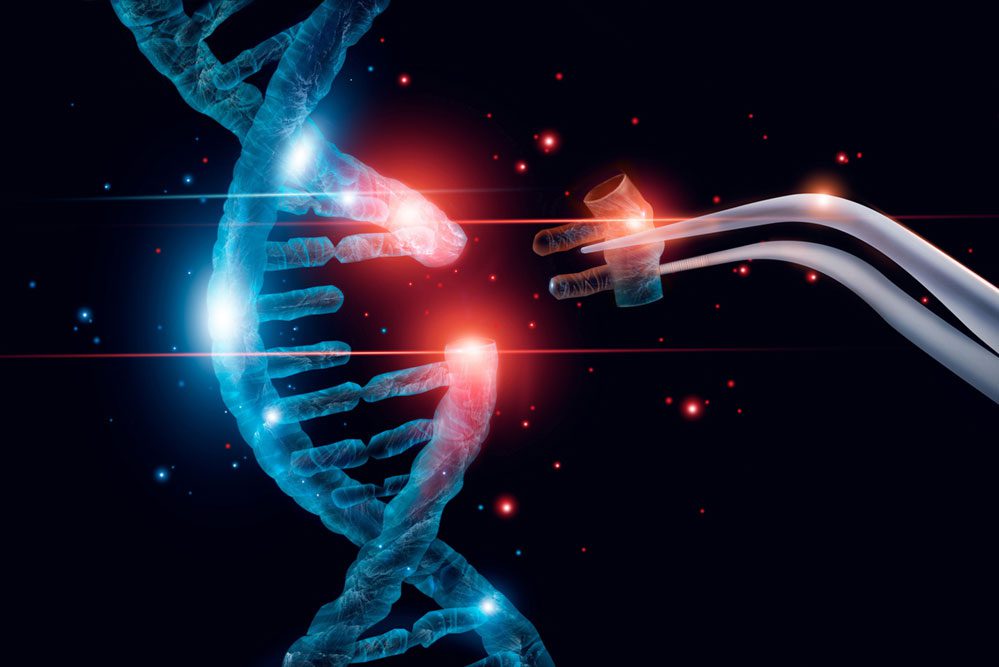 CRISPR, a simple yet powerful tool used for editing genomes, holds promise for curing disease and advancing science in a multitude of applications. Although CRISPR systems were first identified in 1987 by Japanese scientist Yoshizumi Ishino and his team, it took 25 years for the actual technology behind the CRISPR-Cas9 gene editing system to be discovered by Jennifer Doudna and Emmanuelle Charpentier who received the Nobel chemistry prize in 2020 for pioneering it.

A decade later, the development of this disruptive technology is occurring at an astonishing pace with genome engineers continuing to improve the tool’s specificity and scalability. Researchers are now exploring the use of CRISPR-Cas9 to develop genome-edited crops that can withstand harmful environmental factors and insects such as mosquitos to control the spread of malaria. It’s also revolutionizing experimental therapies for a wide range of genetic disorders including blindness, cancer, diabetes, and HIV. Here are just a few of our member companies using genome editing to positively impact our world and the people who live in it.

Find and replace. It’s easy to do when copy editing a digital document but what about using it to edit genes? Graphite Bio is doing just that by using technology that can precisely repair gene mutations, replace malfunctioning genes, or insert new genetic cargo for therapeutic approaches to treat sickness. Their UltraHDR gene editing platform harnesses the power of CRISPR technology and natural DNA repair processes known as homology directed repair to develop new genetic medicines that target different genetic disorders, including sickle cell disease. Graphite is currently in a Phase 1 trial to study its investigational, next-generation, gene-edited autologous stem cell-based therapy for the inherited blood disorder. Also in the pipeline are treatments for beta-thalassemia, another blood disorder that causes a reduction in the amount of beta-globin that is produced, and alpha-1 antitrypsin deficiency which causes progressive lung and liver disease.

While CRISPR enables the type of precision to create therapies specifically designed for individual patients, this tailored approach can sometimes create an issue with manufacturing scalability. Caribou Biosciences, a Berkeley-based biopharmaceutical company co-founded by none other than CRISPR pioneer Jennifer Doudna, is developing genome-edited off-the-shelf immune cell therapies to treat cancer that can be available to a broader patient population. Using the company’s next-generation CRISPR technology called chRDNA allows Caribou to make multiple gene edits efficiently and with specificity. Caribou is currently collaborating with Abbvie and leveraging its CRISPR-based platform to engineer CAR-T cell therapies that address unmet medical needs.

You’ve Heard of CPU But What About BPU?

Integrating biology with electronics to create CRISPR-Chip, San Diego-based Cardea Bio has created a biosensor that can measure CRISPR activity quantitatively and provide more regulation and standardization of gene editing processes. Using graphene, which is essentially a single, thin layer of graphite and holds a unique combination of properties, engineers at Cardea have already produced over half a million sensors that can monitor proteins, DNA, and RNA. The company’s Biosignal processing Unit (BPU) platform collects all of the data from DNA samples, RNA analysis, and proteins in one place to bring new insights in studying and understanding biology. The Bill & Melinda Gates Foundation have taken an interest in Cardea’s bio-sensing capabilities, awarding a $1.1 million grant earlier this year to fund a project that will determine if Cardea’s BPU can be used to detect diseases like COVID-19 and cancer via odor.

Gene Editing at the Touch of a Button

Typical gene editing experiments take time—we’re talking several months or even years to complete. Digital genome engineering company Inscripta knew they could accelerate and simplify the process, thereby creating its Onyx platform, the world’s first fully automated benchtop instrument for genome-scale engineering. The platform has the ability to do a variety of different edits in weeks not months and is being used in a multitude of applications. Companies focused on sustainability are using the platform to edit plant cells so they possess desired traits such as pathogen resistance to help increase food production for our world’s growing population. Amyris, a leading synthetic biology company, is using it to create bio-based products with sustainable and natural ingredients.