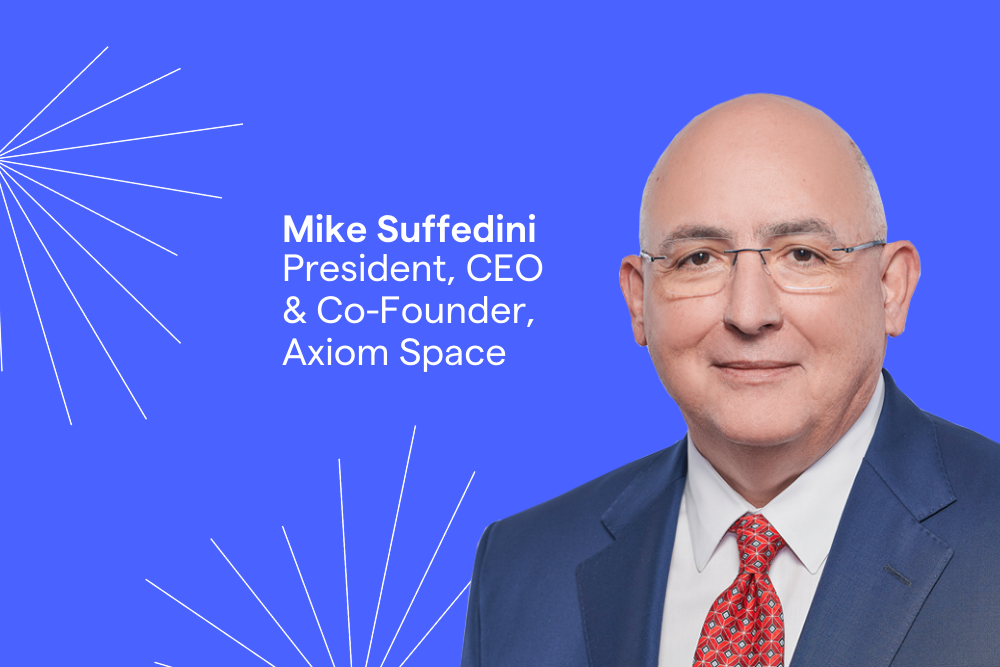 Axiom Space has an ambitious undertaking ahead constructing the world’s first commercial Space Station. What prompted you and your co-founder to begin this endeavor following your tenure at NASA’s International Space Station?

When Dr. Kam Ghaffarian and I got together to talk about what we’d like to do together, in the end, there was really only one thing I knew how to do: build and operate a space station.

I always thought I’d wait for a company to decide to build a commercial space station, and that I might go work for them one day, but that day never came. Dr. Ghaffarian called me back the next day and said, “Okay, I’m in.” I have to admit, I was a little surprised, but we started our company together, he seeded it, and the rest is history.

What does this mean for the current International Space Station? And how will you continue as partners?

The implications are pretty significant, although not widely discussed. First, we do have a very close relationship with NASA—we were awarded a contract in January to be the sole entity that would be allowed to attach to the ISS and build on it.

That provides the opportunity for the users of the ISS to have a place to go before it is retired, which is huge. When you think about doing research and manufacturing in space, it’s quite an investment. If you think ISS is going to end in 2025, for instance, you may think twice about flying to it after this year. You want to spend for the investment you make. It is a major investment to fly hardware and do work on orbit. Some companies would look at that and say, “I just don’t think I want to spend the time building up the hardware and then flying it for only a couple years on orbit.”

So what we’ve done in this process is given an unlimited window for users. Anyone that has an idea can now be on orbit for as long as they wish and they don’t have to worry about a race against the clock. That’s probably one of the most significant results of our work. 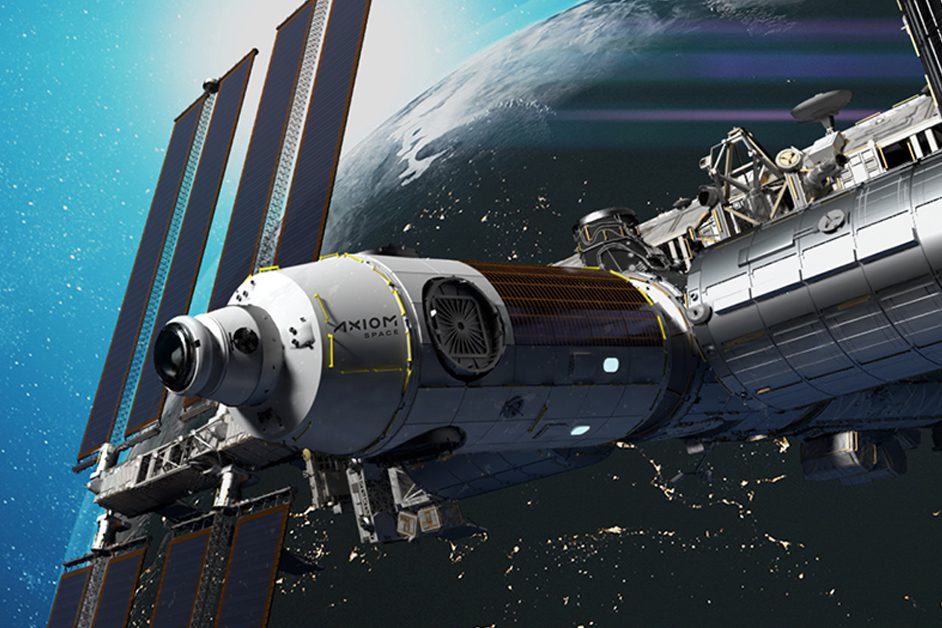 For readers completely new to this emerging industry, where does it currently stand?

Thus far the industry has not provided anything. All the opportunities to utilize low Earth orbit in an environment that will support humans, either temporarily or long term, is provided by governments. It’s extremely limited, as most people know. What we are providing is an opportunity for people to fly to space, to experience space, but also to do more research and hopefully manufacturing in space.

There are many other uses of low Earth orbit, as well, but we are really going to be the first to provide this opportunity. I expect there will be others over time. There are some recent announcements about free fliers at some point, for example. But we’ll be in orbit in 2024 and we’ll be the first to really provide this. So, right now, we are fairly unique in what we offer in terms of environment, and while the ISS is providing opportunities for relatively concentrated research efforts, nobody’s providing the infrastructure that’s going to be required to increase the research that gets done on orbit and ultimately be a platform to utilize when ISS goes away.

You mentioned research, how will the new commercial space station be a catalyst for further discovery once it’s completed in three years?

I think the biggest advantage other than just an environment is the length of time it affords companies to do research. You need access and time to react to what you learn and try the next thing, and the next thing, and the next thing. We’ve developed a station that is fully evolvable. Every module that flies to our station can fly itself. So when one module gets older or is out of date, we can detach and fly to orbit safely, and the next one can take its place. We theoretically can be in space indefinitely, providing the opportunity to do long-term research and allowing researchers to focus on their work and not have to worry about whether the lab is going to be there. They just need to figure out what research they want to do, and what updates they need to do along the way to make sure that they’re getting the data they need.

If we’re going to allow space to become available to a more broad expanse of users, the possibilities are almost infinite.

And when we talk about microgravity, what does that mean in terms of disrupting the current pharmaceutical drug discovery and development process?

There have been years of research, fundamental and basic and applied, all of which has really opened the door of knowledge for what happens when you remove the most effective attribute on the ground, by far: gravity. Gravity is such an overwhelming force that it’s hard to see the secondary and tertiary effects of it and understand their role in whatever it is it’s being studied.

If we’re going to allow space to become available to a more broad expanse of users, the possibilities are almost infinite when it comes to the research, science, manufacturing, and entire pharmaceutical community. I know that they’re very excited about the opportunities, and we’re happy to support them.

Are there additional benefits of conducting research in the microgravity environment that could be leveraged by life science companies?

There’s a broad range of both materials research and life science–related research that benefit from the science–they just have different effects. In the materials world, for instance, there have been a number of proven cases that alloys or fibers created in space produce this very, very pure product. The molecules form in a very homogeneous fashion because they’re not affected by convection, gravity, and sedimentation, etc.

With the expanded access to space exploration that you’ll be able to provide, how many astronaut researchers could we potentially see in space in the next five or 10 years?

When our first module shows up in late 2024, we’ll be able to house our own crew, so we could go up to four. By that point, we’ll be flying short duration flights. We have one relatively long 180-day mission, but that’s probably going to be a country that wants to participate with existing countries on ISS. To have scientists up there working every day doing research, for instance, that can start as early as late 2024 when we start flying long duration crude orbit.

Before 2024, we have professional astronaut flights scheduled that are about 60 days long. So there are some extended opportunities for researchers. Again, it doesn’t matter who you are. If you need to fly to do research, it’s really just a matter of what training you get for your time aboard ISS and passing medical tests. They are researchers by trade, but as a result of what we do, they become astronauts, too. If you decide you want to go to space, we get you ready to go. 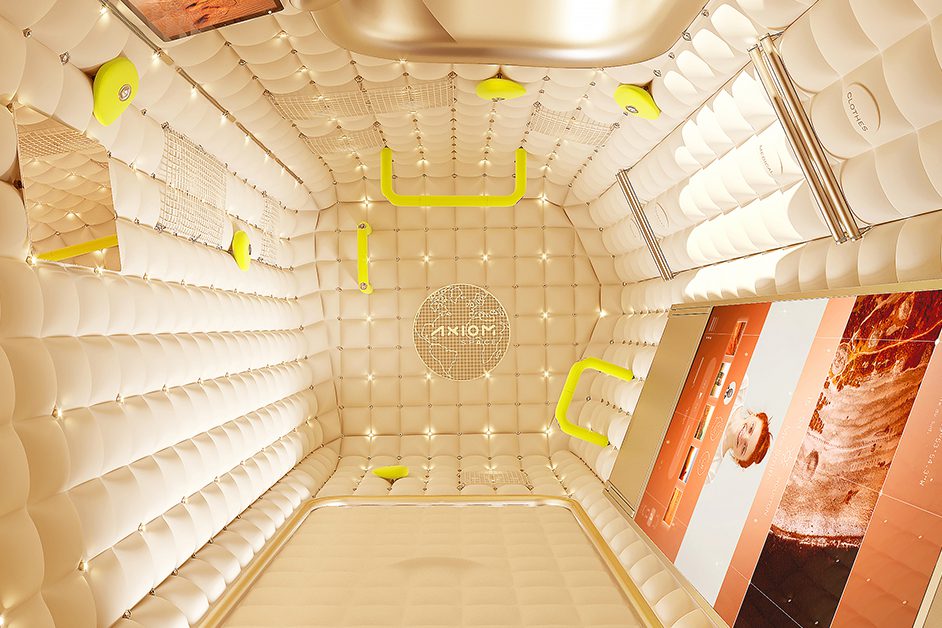 The space station project is going to bring more than 1000 new jobs to your new campus in Houston. What is your talent acquisition strategy? And what do you envision in terms of the size that Axiom space will grow to be?

We are aiming to have 1,000 employees by 2025. Most likely 70% of those will be engineers and 30% will involve everything else: legal, finance, contracting, human resources, marketing, sales, etc.

We hire very experienced leadership, and focus on mid-level career individuals with some experience but still have a ways to go in their careers at the second level of leadership. We also hire quite a few from the universities around the country, and even internationally. We’re at 100 now, we’ll be at 133 next week, and we’re supposed to get up to 300 this year. So we’ve got a real push going on.

Our priority has always been the health and well-being of our employees.

When you think about this last year and the pandemic obviously causing a lot of companies to shift priorities and operations, what stands out as the most difficult challenges that you and your team have faced?

Our priority has always been the health and well-being of our employees. That priority hasn’t changed. Of course, protecting our individuals while still working is one of the biggest challenges we’ve all faced.

Largely, we’ve remained open. We had one two-week period where we shut down back in July, when three individuals contracted COVID outside of the office. So we shut things down for two weeks and then brought everybody back. We expanded our footprint much faster than we grew in order to make sure we had plenty of social distancing and also provided masks and gloves and sanitation.

That was an interesting challenge because when you mix design and engineering, you’ve really got to have your engineers together. Building engineering units and testing them requires collaboration and it’s just impossible to do that from your home. As an essential business, we were able to continue to operate. We’ve done very well with protecting our individuals along the way. 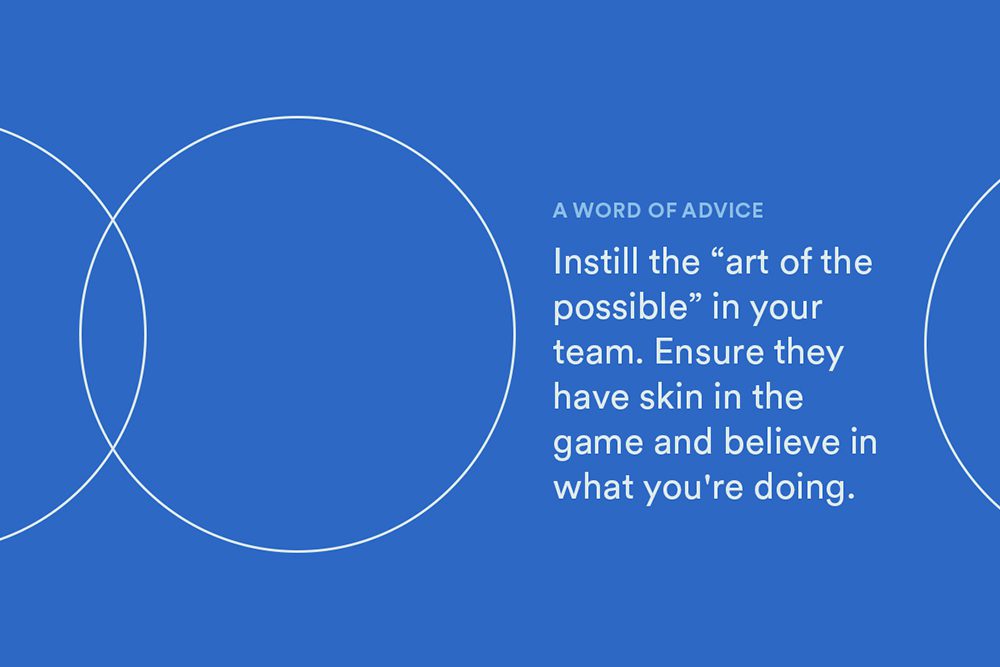 What do you see as the most valuable leadership skills needed today and into the future?

That’s a great question. An entrepreneur is somebody who is doing something, typically, that’s not already been done. When you’re leading something like that, you really have to instill the “art of the possible” in everybody who’s working for you, make sure they have skin in the game, and are interested and believe in what you’re doing.

All of that takes leadership. Our biggest drive as leaders of this company is to help NASA learn how to do commercial, which they’re learning today, and to help lead the government while they’re trying to figure out how to fund and accept what commercialization low Earth orbit looks like.

Today, it’s about giving guidelines to the individuals that work for you, and then giving them the freedom to implement, with a minimal amount of interference. It’s about walking the talk.

After the space station launches, what is your long-term vision for the company and the ecosystem you intend to support?

We are not only building a space station, but we’re helping build the user base. Some users are well-defined and understand what space can do for them, and they just need access and help integrating. We provide that. But really, success for us is when we help companies who don’t even realize how space can help them begin to get involved. I used to say that success is when every boardroom in America asks, “Hey, is it cost effective for us to use space to support our effort?” And when we’ve got everybody asking that question, that’ll be success.

We’re looking towards the future for a much bigger space station that houses 200-300 people and has a very large rotating section that has about an eighth gravity, which should be adequate to keep your bones strong and muscles strong.

People will come and their families will be able to come with them. There will be people who run the stores and the movie theaters and everything else that you have to run while you’re there.

So that’s our vision for the future. It’s about humanity’s ticket, the first real step off the planet.