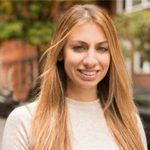 Los Angeles Mayor Eric Garcetti recently named Tanya as one of his three picks for the city’s Entrepreneur in Residence program, but that was far from her most notable achievement of 2017. The UCLA grad also launched EndoCyclic Therapeutics, where she’s working to develop the first non-hormone therapeutic for endometriosis, the leading cause of infertility and disability in women during their reproductive years. Not long after earning her Ph.D. in biochemistry and molecular biology, Tanya dove into key business roles at Affymetrix and Ayasdi in the Bay Area. Since then, she also created Building Blocks Advisory Group, which works with life science startups and investors to bring great ideas to market. Tanya attributes her impressive work ethic to her years as a nationally ranked swimmer, where she learned to set goals, endure tough workouts and “sacrifice fun to reach a bigger goal.”